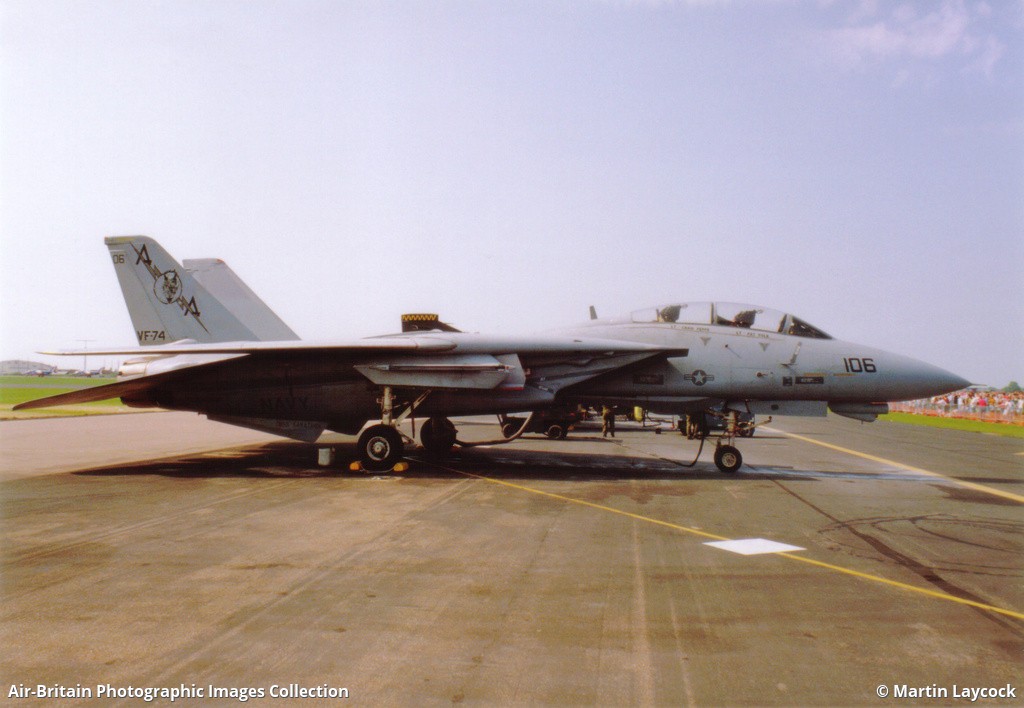 Photographed on the flightline at Air Fete 92, this VF-74 'Be-Devilers' Tomcat was emabarked on the USS Saratoga (CV-60) at the time. The Squadron were the first in the US Navy to receive the F-14A+ (later redesignated F-14B) on the 11th August 1988. In 1990 they took part in Operation Desert Shield and Operation Desert Storm deploying on the 7th August, USS Saratoga relieving the USS Eisenhower (CVN-69) battle group in the Mediterranean and the Red Sea. When hostilities broke out the squadron flew many Combat Air Patrols (CAPs) but the Iraqi Air Force wisely decided to remain on the ground. After eight months the squadron returned to their shore base at NAS Oceana, Virginia on the 27th March 1991 without any losses. Within a year of returning from the Gulf War VF-74 were back on cruise, departing aboard the Saratoga on the 6th May 1992. After this picture was taken the squadron would be on combat operations again in support of the United Nations over the former Yugoslavia in July. Sadly VF-74 disbanded on the 30th April 1994 after fifty years of service. This particular Tomcat would later serve with VF-103 'Jolly Rogers' with modex AA-103 and was the CAG bird while embarked aboard the USS George Washington (CVN-73) in 2000. After retirement she was placed in storage at AMARC with the inventory code AN1K0173 from the 26th January 2005.