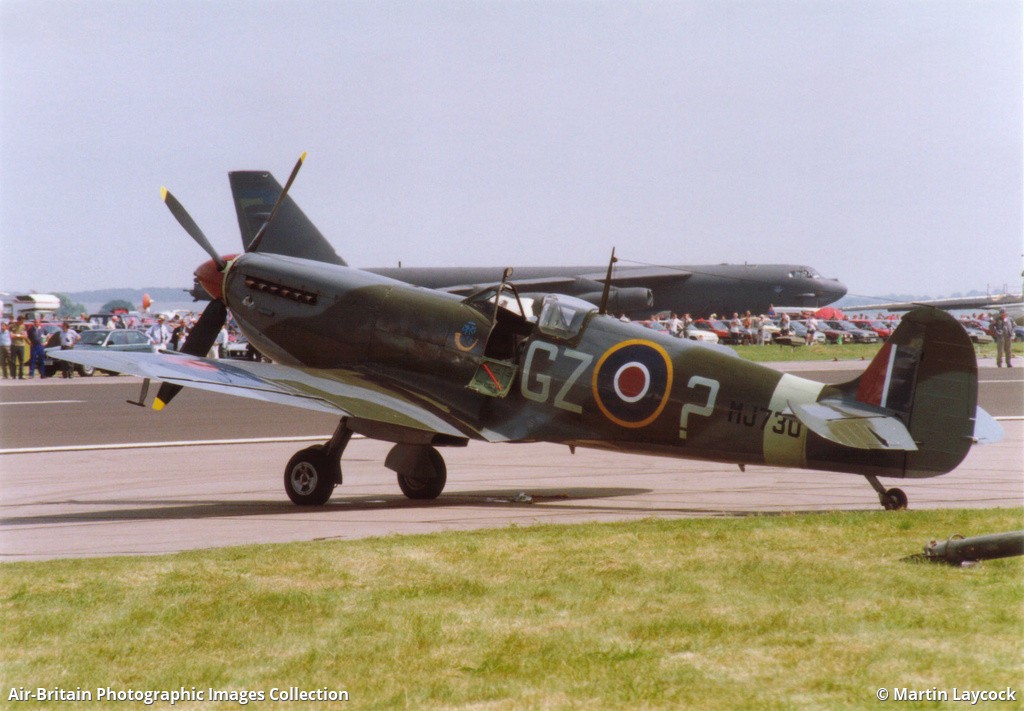 Photographed during Air Tournament International 92. This Spitfire was built at Castle Bromwich in Birmingham in 1943 and made her first flight on the 10th of December that year. At the controls for that maiden flight was the late, great Alex Henshaw. She was allocated to the Royal Canadian Air Force as MJ730 and was shipped to Casablanca. She saw service with 417 Squadron RCAF before being allocated to 154 Squadron RAF based in Corsica. Wearing the code HT-W she flew 95 bomber escort missions. Her next operator was 32 Squadron based at Kolomaki, Greece becoming the personal aircraft of Squadron Leader George Silvester DFC in whose markings she is shown here. The strange code was a result of a comment Silvester made to his ground crew in that "there was a bit of a question mark" over which identity letter to give his Spitfire because he belonged to neither 'A' Flight or 'B' Flight. The ground crew, as a joke, painted a large question mark where the individual code letter would have been. From that moment on MJ730 was known as 'The CO's Query'. Later operators included 249 squadron RAF, the Italian Air Force as MM4094, and finally the fledgling air force of the Israeli IDF. She ended her operational career with an Operational Training Unit at Ramat David before being donated to a Kibbutz to be used on a playground. Salvation came at the hands of Robs Lamplough in the late 1970s and she was recovered to the UK, passing through a few different owners, before flying again on the 12th November 1988 at East Midlands. She was sold in 2000 to Jerry Yagin/Fighter Factory in Suffolk, Virginia, USA becoming N730MJ.