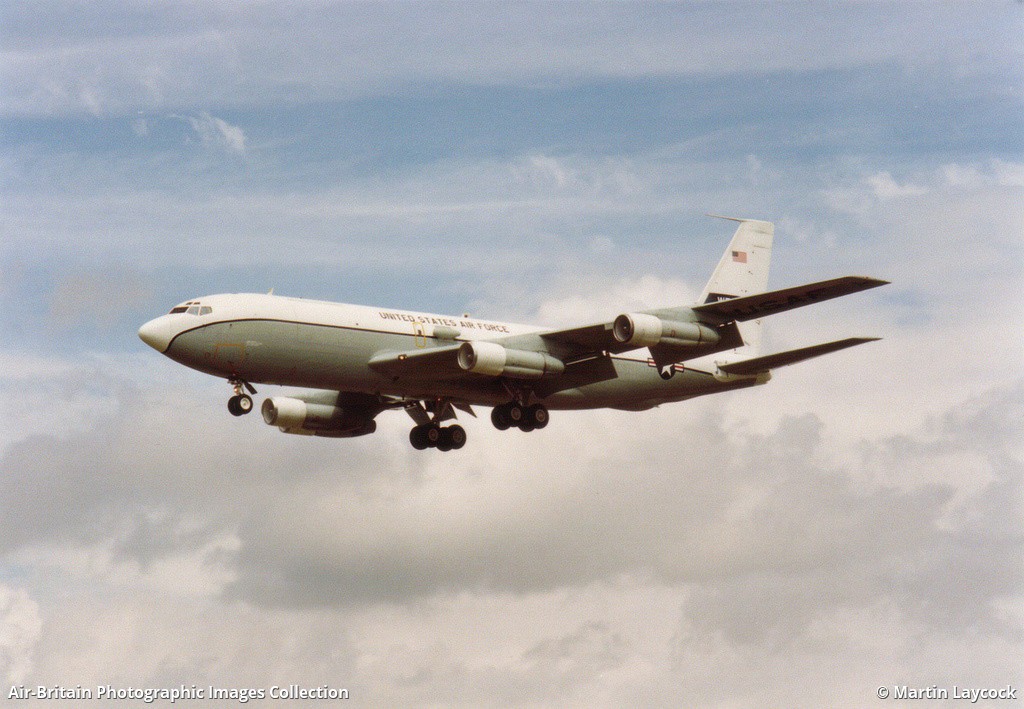 Photographed in the twilight of her career arriving at IAT93, this WC-135B was removed from service shortly after her appearance at Fairford due to irreparable corrosion in the airframe. Although almost totally obscured in this view, she carries the slightly misleading title 'WEATHER' on the vertical stabilizer to denote her atmospheric sampling role. Her mission however was not to improve the forecast! This aircraft was used to collect samples from the atmosphere for the purpose of detecting and identifying nuclear explosions under a program code-named CONSTANT PHOENIX. This program supports United States national level consumers by collecting particulate debris and gaseous effluents from accessible regions of the atmosphere in support of the Limited Nuclear Test Ban Treaty of 1963. CONSTANT PHOENIX was commisioned by General Dwight D. Eisenhower on the 16th September 1947 when he gave the Army Air Forces overall responsibility for detecting atomic explosions anywhere in the world. Initially the WB-29 Superfortress was employed in this mission. In September 1949, a WB-29 flying between Alaska and Japan detected nuclear debris from Russiaâs first atomic bomb test. Beginning in August 1950, WB-50 aircraft were converted for the atmospheric sampling mission. The WC-135s began to replace the WB-50s in December 1965 and became the mainstay of the atmospheric collection program right up to the present day. Originally converted from a standard C-135B this unusual and very specialist aircraft was informally known as 'the weather bird' by personnel working on the CONSTANT PHOENIX program. She was retired to AMARC, arriving there on the 28 September 1993 and was allocated the Inventory Code AACA0090 before eventually being broken up. Two other CONSTANT PHOENIX aircraft are currently being used, a WC-135C (62-3582 converted from an EC-135C LOOKING GLASS) and a WC-135W (61-2667 converted from a C-135B).