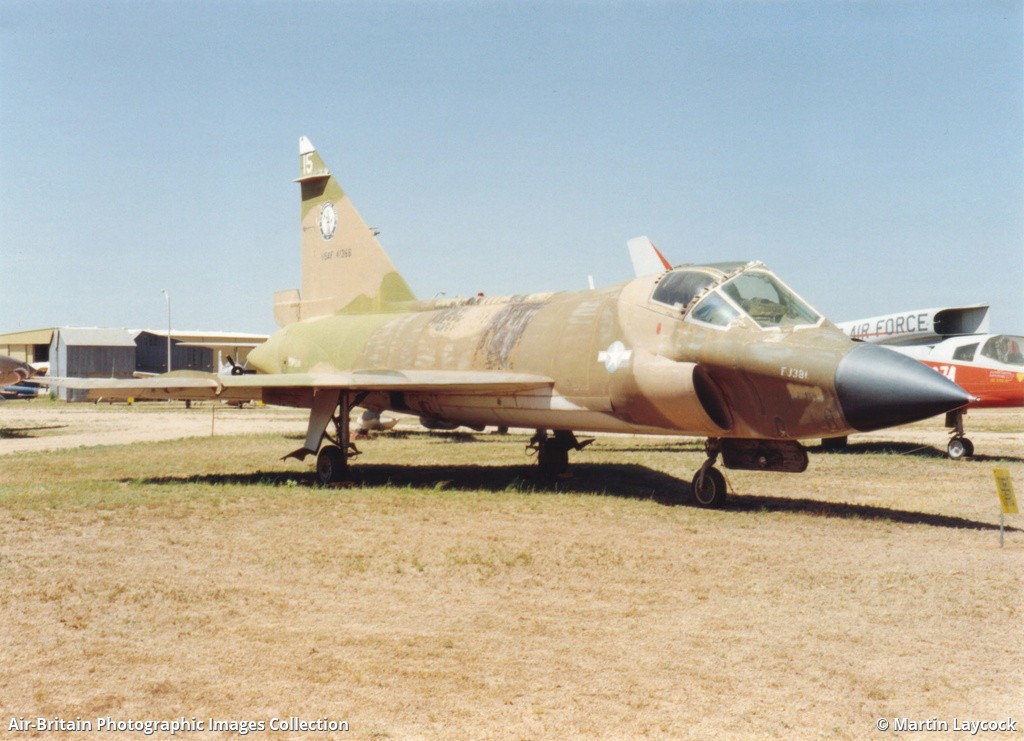 Because of the very different handling characteristics inherent in delta-winged aircraft, especially the high angle of attack in take-off and landing and the high induced drag created while turning, the USAF decided that a two-seat trainer version of the Delta Dagger was neccessary. The result was this, the TF-102A combat trainer. It was believed that the side-by-side seating arrangement would simplify the training task despite the adverse affect it would have on the aircraft's performance. Indeed, during initial testing the rather bulbous cockpit created severe buffeting at high speeds, this problem was eventually cured by fitting vortex generators to the cockpit canopy framing and enlarging the vertical stabiliser. Because of the wider cockpit the engine air intakes had to be reconfigured and had to be mounted lower down on the fuselage than on the single-seat version. The rest of the airframe however, was identical to that of the F-102A and the same weapons could be carried. The Hughes MG-10 fire control system, however, was omitted in the TF-102A. Although 111 TF-102As were ordered, only 63 were actually constructed. Each F-102A squadron normally had two TF-102As allocated to them. The TF-102A saw operational service briefly over Vietnam as a 'Fast FAC' (Fast Forward Air Controller). This one was photographed before being restored and is still wearing her AMARC Inventory code on the nose. After this photograph was taken she was dislayed for a while in a Vietnam War era camouflage scheme but has since been repainted again and now wears a light grey scheme and the markings of the 525th FIS, based at Bitburg AFB, West Germany. She's displayed at Pima courtesy of the National Museum of the United States Air Force, Wright-Patterson AFB, Ohio.