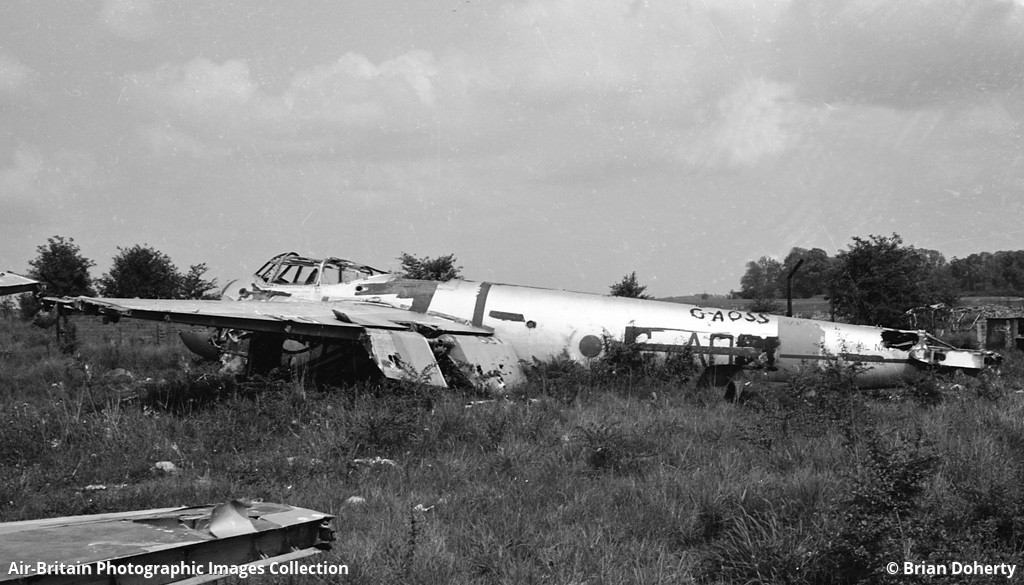 This picture is © Brian Doherty and may not be used or published without permission.

Date approximate. it was to have gone to aerial survey company Jack Amman Photogrammetric Engineers of San Antonio, Texas, but the sale fell through and it went to Derby Aviation followed by registration to Roberta Cowell. Copied with the author's permission - Registered to the company as G-AOSS in July of that year, the âMossieâ was to be prepared for former RAF pilot Roberta Cowell who was planning a 4,500 mile (7,242km) record-breaking flight to South America. Work was noted underway in October 1958 and the Mosquito was subsequently registered to Cowell that December. But her plans were thwarted due to a lack of suitable engines and by March 1959 all work had stopped. In early 1960, a Derby crew cut through the engine bearers with an oxyacetylene torch, hacked off the outer wing panels with axes, dowsed the resulting kindling with petrol and set it on fire. The once purposeful Mosquito was quickly consumed in a sad symphony of crackling wood, exploding accumulator bottles and bursting tyres. Only the pilotâs control wheel and a small section of ply, balsa and fabric fuselage shell bearing the RAF serial were saved.